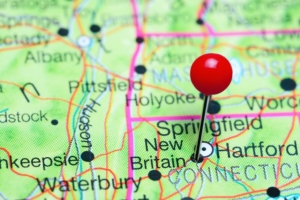 The city was first settled in the late 17th century, and was first chartered as a city in 1871. In the intervening years, the city has grown tremendously. In the early 20th century, it was known as the “Hardware Capital of the World”, due to the large number of hardware manufacturing companies located in the area.

Uniquely, the area has a very high population of Polish people, especially in the historic “Little Poland” neighborhood. Nearly 20% of the population have Polish ancestry.

As far as the economy is concerned, the median income of a family in New Britain is $42,056, and the area has a slightly-above-average cost of living, compared to the rest of the US. One of the largest employers in the city is the Fortune 500 company Stanley Black & Decker. Other top employers include The Hospital of Central Connecticut, Celebration Foods, and Tilcon Connecticut.

Transportation is primarily car-based, with bus service provided by Connecticut Transit New Britain and Bristol. Major highways and roads in the area include Connecticut Route 9, which connects to Hartford via I-81 and I-91.

Education is provided by the Consolidated School District of New Britain. The city is also home to Charter Oak State College and Central Connecticut State University.

Interested in moving to New Britain, or elsewhere in the nearby area? If you need further information and details about the area, and would like to learn more about schooling, real estate, the local economy and more, take a look at some of these helpful links and resources.

Interested in purchasing a home in New Britain, Connecticut? You’ll need an experienced home inspector in the area. Home inspections are key to ensure that you get a high-quality home, and avoid any unexpected repair costs. And at Renovee Inspections, we’re here to help. You can contact us now for more information, or schedule your appointment online to get started right away!